A hundred years ago, two men who played a key role in the process of Zion Canyon’s evolution from a national monument to a national park, were busy formulating policy to administer our national parks. At that time, early in the year of 1916, no federal entity existed for the express purpose of administering the growing number of national parks and monuments in America. The two men were working in anticipation of the creation of such an entity. On August 25, 1916, the National Park Service came into being, and one of those men, Stephen Mather, became its first director. The other, Horace M. Albright, succeeded Mather as director after his death. 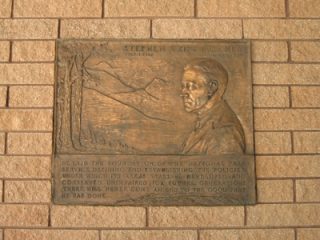 Zion Canyon had first been set aside as Mukuntuweap National Monument by proclamation of President Taft in 1909. After creation of the National Park Service in 1916, then Assistant NPS Director Albright, visited Mukuntuweap several times as he worked to improve and enlarge the monument, with an eye one bringing it to national park status. Thanks to Albright’s tireless efforts, Zion Canyon officially became a national park in 1919. Stephen Mather, as first director of the National Park Service, visited Zion later that year. He became an enthusiastic champion of the canyon and visited the area several more times. A bronze tablet honoring him is mounted near the entrance to the Zion Human History Museum.

This year Zion National Park plans to celebrate the NPS Centennial in many ways. Several events and activities are already planned. Others are still in the planning stages.

The year of commemoration kicks off in Salt Lake City with a statewide event at the Clark Planetarium. Invited representatives from all Utah NPS sites will participate in the premiere of the National Parks Adventure film to be shown in the Planetarium’s IMAX theater on February 11. Prior to and after the premiere, park rangers will conduct outreach to the schools in the Wasatch Front, introducing 500 fourth graders to the mission of the NPS, Find Your Park, and Every Kid in a Park programs. 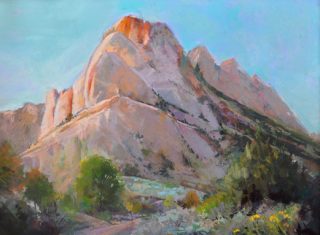 Here in Zion, one of the signature events of the Centennial year will be the “Centennial Edition” of the Zion National Park Plein Air Art Invitational, November 7-13. This year’s edition of the popular event will feature not only paintings of Zion by the 24 invited artists, but also selections of their work depicting other U.S. National Parks.

The museum and visitor center in Zion will host special exhibits relating to the Centennial. The Zion Human History Museum will showcase an exhibit of stories of people who have “Found Their Park,” in Zion from the past and present, then look to the future and the next 100 years of management of National Parks. A “Post Cards Home” visitor center exhibit will encourage visitors to write or draw about their experience in the park and what the Centennial of the NPS means to them. The postcards will be on display in the visitor center and then mailed home to the visitor – creating an extended experience with the park. 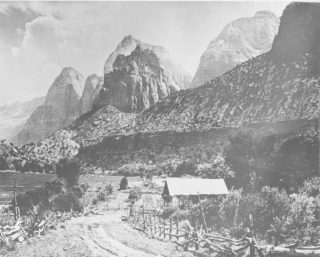 Park staff will be fully engaged in community events throughout 2016, including the STEM Festival in Cedar City, the Amazing Earth Festival in Kanab, the Great Outdoors Event in St. George, and the Earth Day Celebration in Springdale, as well as local fairs and other events.

The park will also have a strong presence on social media to engage the public through the year, and will host a series of three #zioninstameet events to engage local community and millennials visiting the park. The events will focus on exploring the natural and cultural resources of the park and using Instagram to share the experience. They will be held on March 19, June 11 (National Get Outdoors Day), and August 25 (National Park Service Founders Day.)

The park’s signature Centennial project is restoration of the Middle Emerald Pools Trail. The project is currently one of the National Park Foundation’s top 50 Centennial Fundraising Projects, and the Zion National Park Foundation is committed to matching the funds they raise. Construction of the Emerald Pools Trails: Lower, Middle and Upper, began in 1932 by the NPS and were listed on the National Register of Historic Places in 1987. The Middle Emerald Pools Trail was closed after being devastated by a landslide caused by severe flooding. It is one of the most popular trails in the park, and with fundraising support from friends of Zion like you, we plan to open it once again to the public. 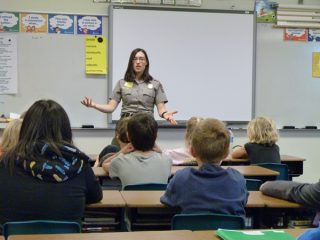 A number of youth programs and projects will have a Centennial theme this year, including: the local “Every Kid in a Park” fourth grade programming, the successful “Concrete to Canyons” initiative that brings 100 underserved Las Vegas, Nevada, fifth graders and their families to the park, the “Building Stewardship Careers Through Tribal Cultural Traditions” program, the “Ticket to Ride” busing program, “Distance Learning Outreach,” Southern Utah’s Outdoor Education Lecture Series, and Dixie State University’s “Science in Zion” program.

And, of course, Zion Canyon Field Institute’s “Fern and J.L. Crawford Lecture Series” will feature it’s own “Centennial” lineup of great presenters this year. You’ll find more detail on this year’s series in this newsletter. 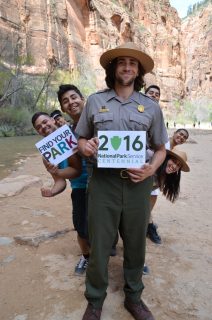 The combined efforts of more than 25 parks and organizations in the Grand Circle area of Utah, Arizona and Nevada, will celebrate the NPS Centennial in a new way through something called “PARKS 100.” This consortium has created a community, locally and online, to help visitors explore more of the area and find all types of parks, as well as local Centennial events, suggested itineraries, visitor centers, and hidden gems. It’s designed to encourage visitors to not only visit our popular National Parks, but to venture out of the well-traveled zone and “Explore Five More,” and “Your Park After Dark.” For more on this initiative, visit www.parks100.com.