A Newly Discovered Species, Thanks to You

A Penstemon by Any Other Name 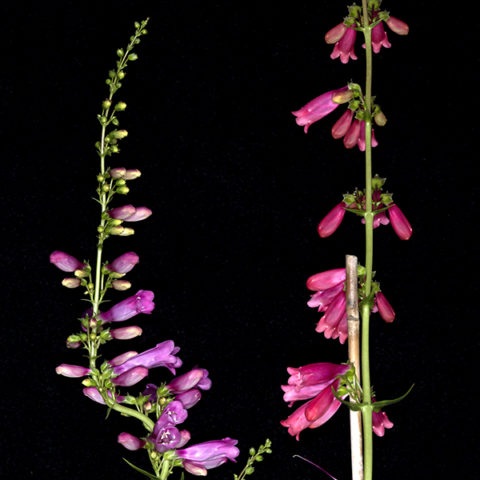 Mutation or hybrid? The answer to this question requires a closer look into the world of plant biology. Zion Forever Project supporters played a critical role in providing plant scientists the tools and equipment they needed to answer one of the canyon’s best-kept secrets.

In our 2019 Field Guide, we featured a project entitled “Discovering a New Species.” Now in 2020, the research is complete and it has yielded fascinating results.

Dr. Mikel Stevens, Professor Emeritus at Brigham Young University, and his colleague Dr. Robert Johnson, along with a team of graduate and undergraduate students, went into the canyons of Zion and the surrounding Grand Staircase in search of answers to the origin of a mysterious and richly colored flower.

The Penstemon eatonii (P. eatonii) is a well-known flower with a natural range stretching from Southern California to the Rocky Mountains. It can survive in a variety of climates; deserts, forests, woodlands, and even open plateaus. Known colloquially as “firecracker”, it is hard to miss their bright red blooms dotting rusted sandstone cliffs and walls. Penstemon laevis (P. laevis) is a delicate purple flower also common in Zion National Park. 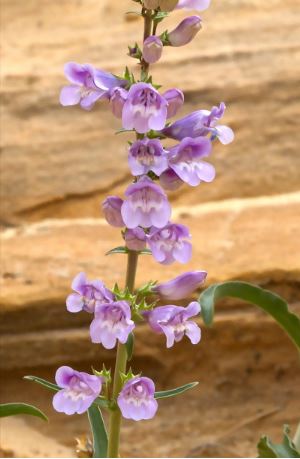 While these red and purple flowers are not a rare sight in the park, Zion is unique as there are other rich color variations with similar blooms, described as tyrian rose, amaranth purple, or even maroon. The question for scientists: Are these rich colors the result of mutations in the existing species, or perhaps more interestingly a new hybrid between the above two species, the result of natural cross-pollination? For Dr. Stevens the interest in this question was rooted in an appreciation for native plants.

“My background has always included plants, but before my more serious work in plant genetics, I was a horticulturalist. I was fascinated with seeing these plants in their natural surroundings. I wondered if others with a similar interest would have a desire to use these flowers in their native or home gardens.” – Dr. Mikel Stevens

The problem is these flowers seem to be unique to this specific area in the desert southwest. Removing them would have consequences for the park’s delicate ecosystem.

Dr. Stevens explains, “These flowers are protected inside these parks for all to enjoy. It is illegal to remove them, and besides the law it’s just simply disrespectful and a bad ecological practice to remove these plants from their native environments, but if we could discover their common parents, then people could produce them at home and enjoy them in a responsible way.”

It had been assumed since the early 1960’s that the blooms being seen in the canyon were in fact a hybrid, but without definitive scientific research it was not possible to rule out naturally occurring mutations.

Mutations in the plant world work similarly to mutations in animals. Plants, like humans, are constantly bombarded with solar radiation. This radiation can lead to changes in the genetic code during cell division. These “mistakes” in humans can have detrimental effects, but in flowers, these mutations can lead to odd colored petals as well as changes in shape.

Hybridization would mean cross-pollination was occurring between P. eatonii and P. laevis. Cross-pollinating in nature is no easy task. In order to be successful the pollen granules of one flower must be an exact molecular match to the other plants stigma. If there is not a match, the pollen granule is rejected. It is either blown away or simply not successful in reaching the ovary.

After obtaining proper permits and permission from the park, Dr. Stevens and the BYU team set out for a multi-day research trip across the swirling sandstone cliffs of the park and surrounding area. With their collection of nondestructive leaf samples in hand, it was back to the lab. It was there, after rigorous research and experimentation, the team received confirmation that in fact, P. eatonii and P. laevis share an exact match between their pollen granules and pollen receptors, meaning cross-pollination can flow both ways.

The initial progeny often yielded a light pink flower, but future generations reached deeply into maroon. The photo at the bottom of the page shows the rainbow of colors produced between these successful crosses. Now, the Penstemon x jonesii (P. x jonesii) stands as the newest confirmed hybrid in the Penstemon genus. The “x” symbol is indicative of its hybrid status, meaning it only occurs naturally, where both parents are present although Dr. Stevens explains in the far future it could become a truly isolated species, “While it is not likely anytime in the near future, there are ways plants can become isolated. It could be that animals and wind move seeds far distances, although this is not likely for P. x jonesii. Another possibility, but also not typical is the progeny could bloom out of season or off-cycle from its surrounding parent plants. If this were the case, it would only be able to pollinate with others of its same kind. The more likely scenario would be a situation where there are chromosome mutations, meaning the pollen from the new plant are no longer the same fit for the parent. In this case, they would not be able to cross back to the parent and would truly become isolated.”

While the answer to P. x jonesii’s origins are confirmed, there is still additional research needed to understand why there is a preference for the richly colored blooms in the wild.

“This, for me, is the next interesting question,” said Dr. Stevens. “Why does there seem to be a natural preference towards these deeper richer colors. Does it have to do with attracting pollinators? A colleague of ours from out of state will be coming to the Zion area in the near future to study this relationship. Her research will focus on hummingbirds and their habits and roles in pollinating these wild and native species.”

At higher elevations near Cedar Breaks National Monument, wildflowers are just beginning to bloom in force. The next time you pass a flower along the trail, stop, and take a moment to appreciate it, not only for its beauty but also for its rich genetic past. Are there similar flowers nearby? What birds or insects do you see around you? Who knows, you may just spot the next undiscovered hybrid species.

The Zion Forever Project would like to thank Dr. Stevens and his entire team for their commitment to this project as well as to our countless supporters who cherish these sacred landscapes and seek to conserve them for the enjoyment of future generations. Click here to read the full study and gain insight into the hard science behind one of Utah’s native flowering plants.