Art and the Story of Zion National Park

It wasn’t until the late 1850s that Anglo explorers and mapmakers finally ventured into Zion Canyon and discovered the beauty and majesty long known to the native Southern Paiute people.

In the early 1860s, several small settlements began cropping up along the upper Virgin River reaching to the mouth of Zion Canyon, including Rockville and Springdale. Members of the Church of Jesus Christ of Latter-day Saints had ventured south from Salt Lake City to establish the settlements and build a life along the river. Isaac Behunin was one of those original pioneers. He ventured farther upstream, built a cabin, and started a farm at what is today the site of the Zion Lodge. During long evenings in the canyon twilight, he would open his scriptures and equate their words with the awesome towers of stone that soared above him. He was among the first to call the canyon Zion. For him and the other Latter-day Saints who settled there, it was a place of survival and sanctuary. 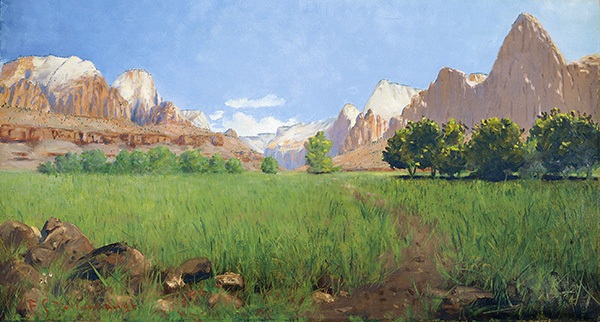 Soon others discovered the canyon for different reasons. With eyes tuned to the beauty and the scientific value of Zion, men like John Wesley Powell, Clarence Dutton, William H. Holmes, Thomas Moran, Jack Hillers, Frederick Dellenbaugh, Charles Savage, and Alfred Lambourne, came with the objective of studying it, painting it, photographing it, or writing about it. In the process they fell in love with the place and spared no words, paint, or photographic plates in evoking its beauty and sharing it with the rest of the world. 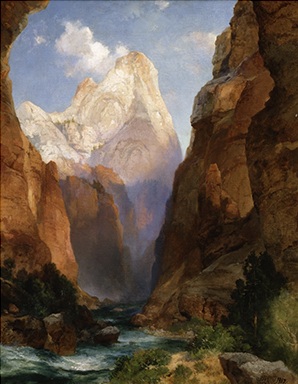 Thomas Moran made his first sketches in the canyon in 1873. Ever since, Zion has been a serious subject for painters of every medium and style, and they’ve been coming to the canyon for nearly a century-and-a-half. For the past ten years, that legacy has been celebrated annually during the first full week of November as two-dozen excellent artists converge in the canyon for the Zion National Park Plein Air Art Invitational. In 2020, however, the annual art event in Zion has been modified into a virtual event featuring the work of six of the canyon’s most beloved artists.

The event celebrates not only the role original art played in the establishment of Zion Canyon as a national monument in 1909, but also the crucial role of art in the promotion and popularization of the park over the decades.

Art has been a part of Zion’s story for centuries, beginning with the prehistoric rock art still visible today in many locations. When the Anglo explorers arrived, they were accompanied by photographers, but the black and white technology of the time could not convey the amazing colors of the canyon to a skeptical public in the east. That’s where the work of the great painters came in. And even their work often fell on incredulous eyes.

In the summer of 1903, Frederick S. Dellenbaugh, who had accompanied John Wesley Powell on his second expedition through the Grand Canyon in 1871–72, found his way back to Springdale where he made several forays into Zion Canyon and produced a series of oil paintings that would be exhibited at the World’s Fair in St. Louis the following year.

Dellenbaugh’s paintings created quite a stir at the 1904 World’s Fair. It happened that a young man named David Hirschi stopped in St. Louis on his way home from an LDS mission in Europe. He’d been raised in Rockville, at the foot of the Zion towers, and he knew every hump and hollow of the astonishing terrain surrounding his boyhood home. It was a pleasant surprise to him, as he visited the Utah pavilion, to learn that these wonderful paintings of Zion were a highlight of the fair. But he was alarmed when he saw that many skeptics insisted there could be no such place on Earth, that the paintings must be fake.

The young man stood resolute and informed everyone within the sound of his voice that there most certainly was such a place—that he knew its every hill and cliff.

Only five years later, in 1909, David Hirschi’s backyard would become Mukuntuweap National Monument, and ten years after that, Zion National Park. The time was fast approaching when people the world over would discover its superlative beauty.

Through a fortunate series of events in 2007, the Zion National Park Foundation (now the Zion Forever Project) was able to purchase one of Dellenbaugh’s rare 1904 World’s Fair paintings. It had been discovered in an attic in Tennessee and was listed for sale at an antique auction near Knoxville. With barely a week’s notice, the Foundation was able to secure funding from the George S. and Dolores Doré Eccles Foundation and arrange for a bidder at the auction. Within two weeks, the painting had come home to Zion where it is now part of the park’s permanent collection. 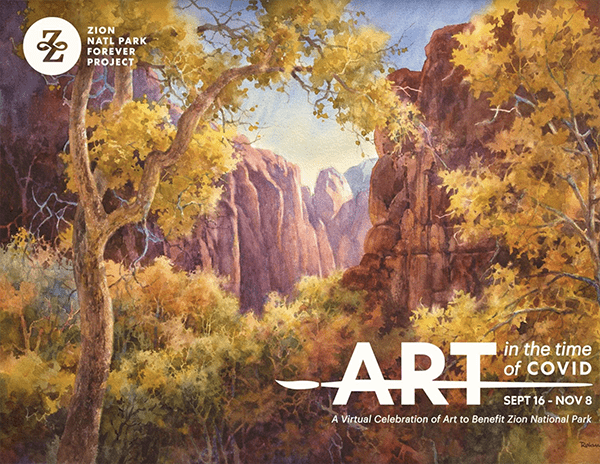 Countless artists have revealed the majesty of Zion Canyon over the years. This year, the Zion Forever Project honors six of those artists in our virtual show entitled: ART IN THE TIME OF COVID. As we all pass through this challenging time together, we are pleased to share these images of a place we all love deeply. And we hope that this wonderful and inspiring art will play a role in the healing and recovery we are all going through right now. We look forward to emerging into a post-Covid world where we can return to the traditional on-site and in-person art events we’ve come to love in Zion.