With the recent passing of former Zion superintendent Jock Whitworth, we reached out to friends and colleagues to share memories of Jock as a leader and friend.

Jock was the superintendent of Zion from 2003 until his retirement in 2014.

During that time, he not only led the park in its daily operations, but also championed new ideas and programs that have had lasting impacts on the park resource, the park service, and the Zion Forever Project.

Jack Burns, retired Chief of Concession Management, worked closely with Jock during his time in the park. “I remember the first day I met Jock. We were having our regular management team meeting and knew we would be meeting our new superintendent. We expected someone in uniform to come through the door, but instead, Jock walked in wearing his typical Hawaiian shirt, torn jeans, and sandals. We thought, ‘wow, this is the new guy!’. He was just so casual. That is just who Jock was.”

Despite that initial impression, Jock did not fail to live up to his leadership duties. Jack shared that soon after Jock’s arrival, a group of dignitaries (including First Lady Laura Bush) arrived in the park for meetings. “The flipside was his ability to be professional. He carried himself well and delivered an excellent speech that perfectly represented the park and our staff. It might sound odd to say this about a boss, but we were all proud of him that day.”

Jack was not the only colleague that appreciated Jock’s Hawaiian shirt collection. Retired Arizona Strip BLM District Manager, Scott Florence, joked that Jock’s fashion had a lasting impact on him. “I never really wore Hawaiian shirts, but when I was headed to Jock’s retirement, someone had purchased me one to wear for the party. That really got me into wearing them, and I have acquired several more since then and wear them often.” Scott appreciated the levity that Jock brought to management meetings. “His wit was so glib, even in normal conversation, he would bring a sense of humor to regional management meetings.”

Lyman Hafen, President and CEO of Zion Forever Project, worked closely with Jock on numerous initiatives to further the park partner relationship. “Jock is the superintendent who encouraged and steered us toward becoming the park’s philanthropy partner. Under his guidance, we formed the Zion National Park Foundation as the fundraising arm of ZNHA. After getting our feet wet in fundraising, the Foundation was the bridge that ultimately led to our becoming the Zion National Park Forever Project, combining our retailing, fundraising, and educational missions into one organization and brand.”

Jock also had a passion for sustainability, and while the path was not always clear, many of the policies he helped enforce laid the groundwork for later success. Lyman recounted one change in particular that has had a lasting impact. “Jock was open to new and envelope-pushing ideas from what was then Zion Natural History Association. He trusted us and was open to breaking new ground when it made sense to. At the same time, his integrity in keeping our organization within the proper side-rails was always solid. I’ll never forget the day he approached me in the parking lot to give me a heads-up that we would likely need to stop selling bottled water in the canyon. At the time, such a decision represented a huge blow to our bottom line, and he knew and understood that; however, he was a leader nationally in ultimately making the decision to curtail the sale of water in disposable bottles in national parks. He planted the seed that day in the parking lot, then worked diligently and transparently with us to help us through the transition. And that transition turned what initially seemed like a curse, into a blessing, as Jock’s Green Team worked to create water filling stations in the park, and we began to develop what became a very successful line of refillable water bottles to sell in the park stores.”

That one decision continues to have an impact, reducing thousands of single-use bottles each season that no longer litter trails and degrade the canyon’s natural beauty.

Bill Dickinson, retired Superintendent of Lake Mead National Recreation Area, was part of the same leadership team as Jock and formed a tight bond while working together. “Jock was an informed and expert professional. He was open, honest, and caring. We were more than colleagues; we were friends.”

Like many others, Bill remembered that Jock was a prolific hiker. “Jock’s hiking was legendary. I am a fast hiker, but jock would pass me easily. He had what seemed like endless energy.” 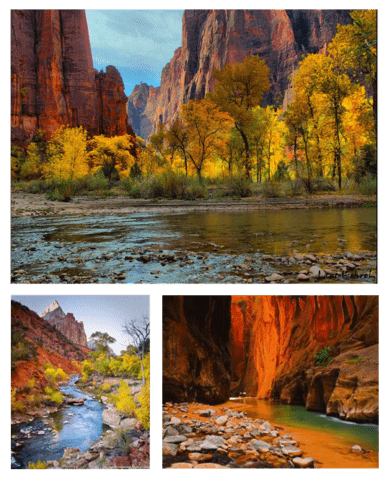 In fact, Jock’s hikes of Angels Landing still maintain some level of lore with the NPS staff at Zion. Some claim the number to be approaching 100 summits, but regardless of the actual number, it was clear he had a passion for the resource that transcended his role as a superintendent.

Darla Sidles, Superintendent of Rocky Mountain National Park, was also part of the same leadership team as Jock, and they grew close.

“Jock was just fun. We were a tight-knit group of folks. He always brought a sense of calmness and levity to our meetings. He was a great guitar player and often brought his guitar to play and sing with us as part of our outings.”

Jock’s passions went beyond hiking and music; he was also a dedicated photographer. Retired Chief Ranger Cindy Purcell shared some of Jock’s photos from his time in the parks.

With more than a decade as the park’s leader, Jock continues to leave a legacy in the parks that will last forever. Our thoughts are with his wife Robin and their family.

Read below to see a few other memories of Jock shared by his colleagues. We know that his actions and legacy will continue to inspire responsible stewardship throughout all public lands.

“I met Jock when he arrived as the new Superintendent while I was working in Zion as the Plateau District Ranger (1999-2005). Before we ever met him in the office, he showed up at one of our happy hour music sessions in the Watchman Housing area where I lived. He fit right into this rag-tag group of musicians as we all shared the music. He was a dang good guitarist, and he could rock out the blues like no other. Jock hired me into the Zion Chief Ranger position in 2010 and I will always be grateful for that. He opened up the opportunity for me to have the best job in the NPS. I worked alongside him until his retirement and together we worked to hire some of the best staff Zion has ever had. I will always respect Jock’s unwavering commitment and dedication to Sustainability, and I believe he secretly loved being called our ‘Green Superintendent’. When it came time to replace the Chief Ranger patrol vehicle, he was pushing hard for a Prius. As I could not get past the cartoon imagine of lights and siren on a Prius, I was able to sell him on the idea of a Hybrid SUV instead. His other love was Angels Landing. I have no doubt that he logged more miles on that trail than all Zion trails added together. He told me that he was going to hike Angles Landing each year to match his years on this earth — a goal he achieved with no problem before he retired. He loved his Zion every day. Jock was an intellectual left-brained artist type, not always the best communicator of his vision/ideas and some people thought him quirky. But if you listened closely……you would get his jokes and understand his music.” — Cynthia J Purcell

“I worked with Jock for many years… we were professional colleagues, and worked together on a number of interagency, collaborative, landscape wide partnership initiatives. Jock was an informed and experienced professional with a positive attitude and a love of the outdoors. He was open and honest and caring. But we were more than work colleagues… we were good friends, and hiking buddies. He was a legend for his numerous hikes to Angles Landing, reported to be a number that equalled his age. Jock was fun to be around. He could put on a uniform and look as professional as they come, but he could also slip on his flip flops and shorts with his guitar and songs and be the guy next door. I have so many wonderful memories of good times with Jock. He will truly be missed, but never forgotten.” — Bill Dickinson, former Superintendent, Lake Mead NRA
____

“I’ll remember Jock’s wonderful sense of humor! His passions…hiking; music; art. Great fundraising initiatives including “An Evening with the Superintendent”; going around to the motels in Springdale asking to set up a Per Night Donation program; Centennial activities including the Fun Run through the Park and the Walk through the Tunnel.” — Mary Kippen
____

“Jock was someone who truly loved the outdoors. He always took every opportunity to walk, hike, climb and experience all the beauty that surrounded him in the many places he worked and explored. He captured so much of that beauty with his ever present camera … and left behind those images that will live on for so many to enjoy.” — Paul Roelandt
____

“I had the good fortune to work with Jock at both Theodore Roosevelt NP and Zion NP. At THRO I lived in park housing right next door to Jock, Robin and their young family. We were both early in our careers and enjoyed the “freedom” of work that was less administrative and more program focused. One of the fun experiences we shared were buffalo and wild horse round-ups (or should I say rodeos?) – they were always exciting and took place on crisp Fall days in the northern plains in the Little Missouri River badlands – spectacular!! Jock came to Zion as Superintendent while I served as Resources Management and Research Division Manager. It was great to get to work together again and reacquaint with Robin and the much grown children! Jock loved to hike into and discover the nooks and crannies of Zion, always looking for an opportunity to get out for a hike and we shared some fun hikes in the backcountry. Jock was dedicated to his family, land and resource conservation, creating meaningful visitor experiences and the NPS mission!! I hope Robin and their children are proud of Jock’s work and his service to the American public – I hope that provides them comfort and peace in this difficult time.” — Jeff Bradybaugh
____

“I never had the pleasure of working with Jock, but have heard many employees who have been in Zion for many years speak highly of him. To continue a legacy of leadership and friendship so many years after leaving speaks volumes. I appreciated Jock’s interest and passion for wilderness management, inholding acquisition, and other land management issues, and I enjoyed our conversations. I am so sorry to hear of his passing.” — Ray O’Neil