Making a Difference for Zion

NOTE: This message was delivered by Lyman Hafen, Executive Director of the Zion Natl Park Forever Project, at launch events held in Springdale, St. George and Salt Lake City, Utah in May & June of 2017.

Most weekday mornings I routinely leave my house in Santa Clara, Utah, and set off into the rising sun.  I drive eastward off the northern fringe of the Mojave Desert and the southern edge of the Great Basin, and climb onto the vast and glorious Colorado Plateau.  This daily ritual transports me from my home on a Chinle ridge above the Santa Clara Creek to my office along the Virgin River, at the base of the towering walls of Kayenta and Navajo Sandstone in Zion National Park.  Between the two points I pass through 200 million years of geologic deposition and erosion, all of which has resulted in a landscape so fascinating and so beckoning that more than 4 million people come from all over the world each year to see it.

Though the drive itself has become habitual, the awe and wonder it inspires have only heightened with time. Invariably, on the way to or from the office, something in the landscape will incite a memory, a line of poetry, a scientific fact, or a story that moves me – often to tears.  Each trip is more than a commute, even more than a journey.  The more I learn, and the more I immerse myself in this place, the more each drive becomes a sojourn full of wonder and enlightenment.

For nearly 90 years the organization I work for has strived to connect visitors to Zion Canyon in the same deep way I’ve just described. It started with a group of local Springdale residents in 1929. They could already see the world was discovering their backyard and all those people needed accurate and inspiring information to connect them with the canyon in a more meaningful way. What became Zion Natural History Association began with those dedicated and well-meaning residents who not only found ways to enhance the experience of visitors by creating books, maps, guides and postcards, but to also raise money for the park in the process.

Using the model started by those residents, ZNHA became the official non-profit partner of Zion National Park, and has since taken on the same role for Cedar Breaks National Monument and Pipe Spring National Monument, as well. All through the years we’ve been a publisher and retailer of interpretive products for the diverse range of visitors who travel to the canyon. As visitation increased and park needs grew, ZNHA grew as well, beginning as a simple ma and pa operation and maturing into a sophisticated business in the 1980s, returning hundreds of thousands of dollars in funding and aid to the park each year.

In 2001, at the request of the park superintendent, ZNHA formed the Zion Canyon Field Institute as its educational arm. In 2007, ZNHA took on the direct fundraising role for the park and formed the Zion National Park Foundation. The role of fundraiser has become more and more imperative each year as park visitation has more than doubled in the last decade and federal appropriations have remained almost flat. In the meantime, Zion National Park’s maintenance backlog has grown to over $60 million, and its fleet of park shuttle busses is now 17 years old and will soon need to be replaced at a cost of more than $30 million.

In recent years as we’ve begun to reach out more and more for philanthropic support for Zion, we’ve come to the hard realization that the name Zion Natural History Association no longer accurately or effectively reflects who we are and what our mission is.

We love the name Zion Natural History Association. It’s a venerable name that we’re very proud of. In fact, it remains our official corporate name. But it is a name that nods to the past and, quite frankly, is confusing to most people.  We’ve learned in recent years that we need a name that propels us into the future and that communicates accurately, effectively and quickly, who we are and what our mission is.

We have now become the Zion Natl Park Forever Project. All our efforts in publishing, retailing, educational field programs and fundraising, now reside under the Zion Forever Project banner. We are focused fully on the wellbeing of Zion National Park, as well as Cedar Breaks National Monument and Pipe Spring National Monument. We are here to tell the stories of their past, to enhance the experience of their visitors today, and to ensure the long-term future of these places we love so much. 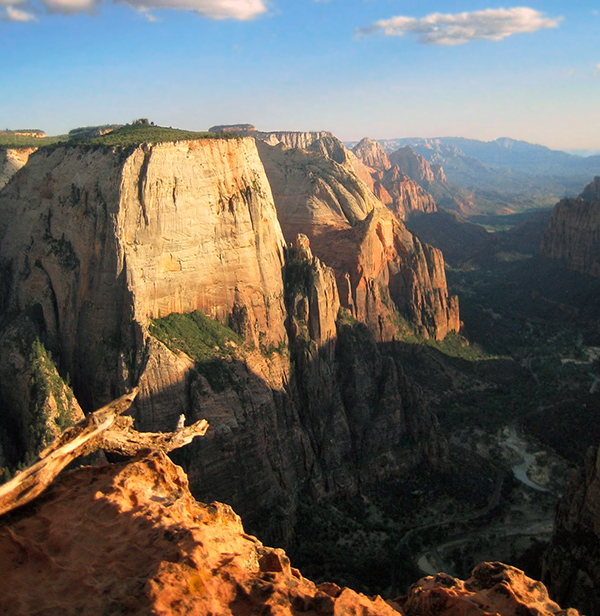 A few years ago while traveling in Europe, I found myself on a streetcar in Linz, Austria, seated next to an Austrian man who seemed very interested in talking to me. He’d quickly deduced that I was American and he wanted to ask me a question. He opened his leather satchel and from it extracted a multi-folded sheet of glossy paper. Slowly and carefully he unfolded the page until it lay open, bright and beautiful, before us. It was a page torn from a magazine, a vivid color image of a familiar Southern Utah scene. The man’s eyes flashed up from the image and locked on mine as he asked in broken English, “Have you ever been there?”

“Yes,” I answered. “Many times. And it’s even more beautiful in person than it is in pictures.”

The Austrian, who himself lived in one of the most scenically magnificent places on earth (think: “Sound of Music”), then said, “I can hardly believe such a place exists.”

I assured him it did, and I noticed small pools of tears forming in his eyes as he firmly declared, “I’m going there someday.”

Images of Zion Canyon have been circulating the world for more than a century now. The desire to experience firsthand what is initially viewed on paper or on a screen, lures more than 4 million people to the canyon each year. They come from every part of America and all corners of the earth. They want to see in person what the artist has beckoned them to see. And I believe it is safe to say that once they get here, every one of them is moved beyond their expectations by the power and beauty of what they see. Each discovers Zion in his or her own way, and returns home with a treasure difficult to describe to the uninitiated.

The Zion Natl Park Forever Project is designed to help connect us to Zion in a deeper way. The park is ours to visit and experience, but it is also ours to sustain and maintain unimpaired for future generations. Ten years ago, no one could have imagined the numbers of visitors coming to the park today. Those numbers are making it more difficult to keep that promise of maintaining the park unimpaired for our children’s children. A new “Field Guide to Park Project Priorities” beautifully illustrates the park’s current needs and how all of us can play a role in meeting them. Forever Project Director Mark Preiss is working to integrate the concept of giving back to the park throughout all the programs that were once part of ZNHA, from simply rounding up your change at park store cash registers, to individual annual giving, to business partnerships, and other programs. The Field Guide and the entire Forever Project overview are easily accessible at zionpark.org.

That Austrian man I met several years ago (and I hope with all my heart he has made it to Zion by now), along with all the millions who come to the canyon each year, and those fortunate enough to live in Zion’s shadow and be the beneficiaries of such beauty and economic bounty in their own backyard, have a responsibility of stewardship for the park. The Zion Forever Project makes it possible for everyone, whether a once-in-a-lifetime visitor, or a business owner at the entrance to the park, to give something back to Zion, and make a difference, now and forever.