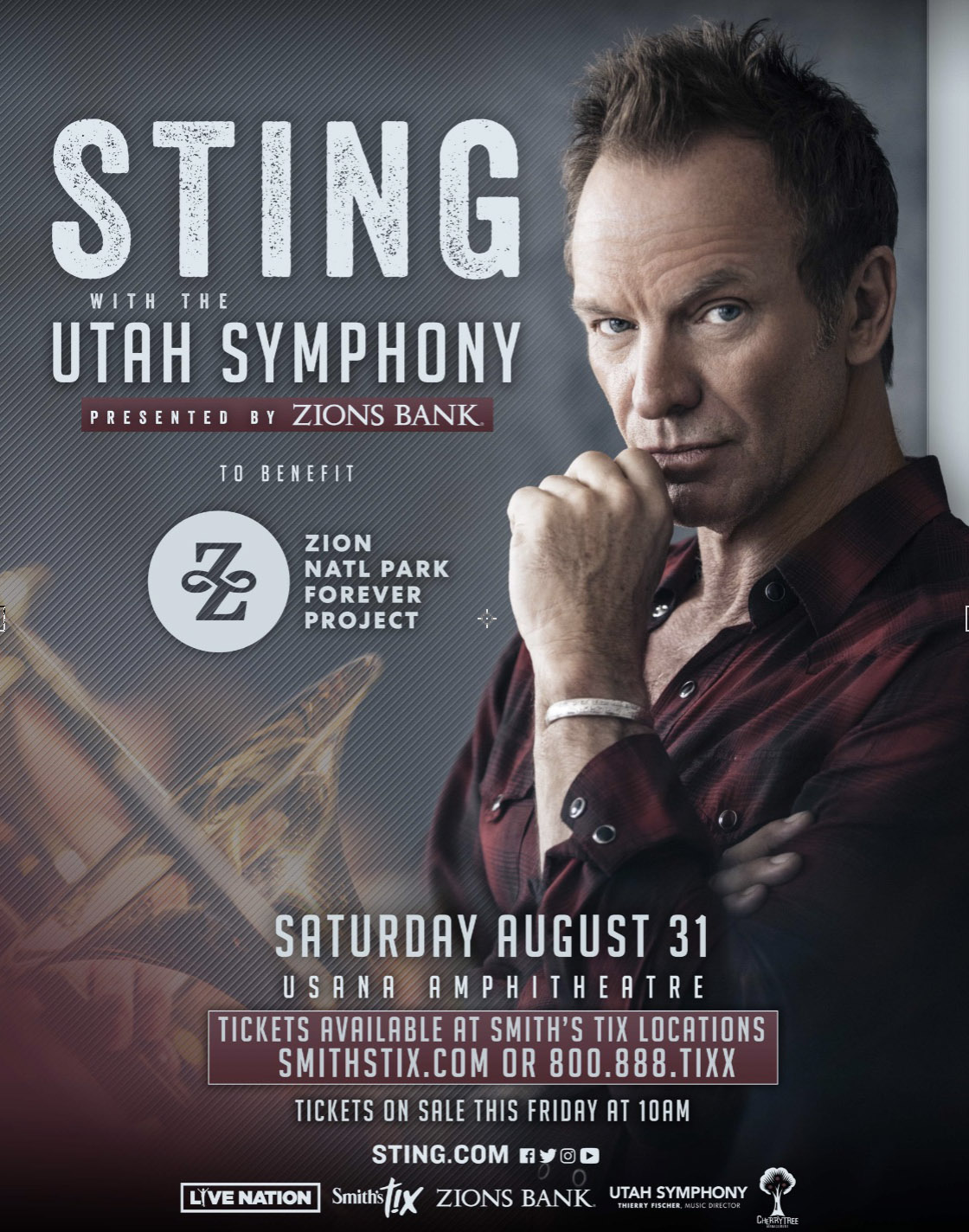 Cherrytree Management and Live Nation have confirmed that Sting will perform at the Usana Amphitheatre in Utah on August 31 at 7:30 PM for a very special, one-night-only appearance, accompanied by the Utah Symphony. All proceeds from the concert will go to the Zion Forever Project to benefit Zion National Park as part of the Park’s centennial celebration.

Drawing from a diverse and illustrious career that has produced numerous multi-platinum albums, a staggering list of number one songs, countless accolades and worldwide record sales of nearly 100 million, this concert, conducted by Rob Mathes, finds Sting performing his greatest hits re-imagined for symphonic arrangement. Selections will include fan-favorites such as “Roxanne,” “Next To You,” “Every Little Thing She Does Is Magic” and “Every Breath You Take,” to notable songs from Sting’s enduring solo career – “Englishman in New York,” “Fragile,” “If I Ever Lose My Faith in You,” “Fields of Gold,” and “Desert Rose.”

Tickets go on sale Friday, February 15th at 10:00 am at all Smith’s Tix locations, www.smithstix.com or by phone at 800-888-TIXX. Members of Sting’s Fan Club will have the opportunity to access tickets in select markets by visiting www.sting.com.

ABOUT STING
Composer, singer-songwriter, actor, author, and activist Sting was born in Newcastle, England before moving to London in 1977 to form The Police with Stewart Copeland and Andy Summers. The band released five studio albums, earned six Grammy Awards and two Brits, and was inducted into The Rock and Roll Hall of Fame in 2003.

As one of the world’s most distinctive solo artists, Sting has received an additional 11 Grammy Awards, two Brits, a Golden Globe, an Emmy, four Oscar nominations (including 2017’s nomination for “The Empty Chair” from JIM: THE JAMES FOLEY STORY), a TONY nomination, Billboard Magazine’s Century Award, and MusiCares 2004 Person of the Year.  Also a member of the Songwriters Hall of Fame, he has received the Kennedy Center Honors, The American Music Award of Merit and The Polar Music Prize. Sting has been awarded Honorary Doctorates of Music by the University of Northumbria (1992), Berklee College of Music (1994), University of Newcastle upon Tyne (2006) and Brown University at its 250th Commencement ceremony (2018).

Following his critically-acclaimed album, 57th & 9th, his first rock/pop collection in over a decade, Sting and reggae icon, Shaggy released a collaborative, island-influenced album, entitled 44/876, that draws from the many surprising connections at the heart of their music and recently received a GRAMMY Award for Best Reggae Album. With its title referencing their home country codes, 44/876 first and foremost honors the duo’s love for Jamaica: Shaggy’s homeland, and the place where Sting penned such classics as The Police’s “Every Breath You Take.”

In the summer of 2018, Sting and Shaggy embarked on a tour of various historic venues where the two Grammy Award-winning artists performed their most celebrated hits as well as songs off their new album, together, combining members of their respective bands. The critically-acclaimed 44/876 World Tour also travelled through North America, South America and Eastern Europe.

Throughout his illustrious career, Sting has sold close to 100 million albums from his combined work with The Police and as a solo artist.

He has appeared in more than 15 films, executive produced the critically acclaimed A Guide to Recognizing Your Saints, and in 1989 starred in The Threepenny Opera on Broadway. His most recent theatre project was the TONY-nominated musical The Last Ship, inspired by his memories of the shipbuilding community of Wallsend in the North East of England where he was born and raised. The show, with music and lyrics by Sting, ran on Broadway in 2014/2015 and completed a critically-acclaimed UK regional theatre tour which ran from March-July 2018. Next year, Sting will star as shipyard foreman Jackie White in the Toronto-based production of The Last Ship at the Princess of Wales Theatre from February 9 through March 24, 2019.

Sting’s support for human rights organizations such as the Rainforest Fund, Amnesty International, and Live Aid mirrors his art in its universal outreach.  Along with wife Trudie Styler, Sting founded the Rainforest Fund in 1989 to protect both the world’s rainforests and the indigenous people living there.  Together they have held 18 benefit concerts to raise funds and awareness for our planet’s endangered resources. Since its inception, the Rainforest Fund has expanded to a network of interconnected organizations working in more than 20 countries over three continents. www.sting.com

ABOUT ZIONS BANK
Zions Bank is Utah’s oldest financial institution and is the only local bank with a statewide distribution of financial centers, operating 98 full-service branches. Zions Bank also operates 23 full-service financial centers in Idaho. In addition to offering a wide range of traditional banking services, Zions Bank is also a leader in small business lending and has ranked as the No. 1 lender of U.S. Small Business Administration 7(a) loans in Utah for the past 25 consecutive years. Founded in 1873, Zions Bank has been serving the communities of Utah for more than 140 years. Additional information is available at www.zionsbank.com. A division of Zions Bancorporation N.A., Member FDIC.

ABOUT THE UTAH SYMPHONY
Founded in 1940, the Utah Symphony performs more than 175 concerts each season and offers all Utahns easy access to world class live musical performances of the world’s greatest music in the state’s top venues. Since being named the orchestra’s seventh music director in 2009, Thierry Fischer has attracted leading musicians and top soloists, refreshed programming, drawn increased audiences, and galvanized community support. In addition to numerous regional and domestic tours, including the Mighty 5® Tour of Utah’s National Parks, the Utah Symphony has embarked on seven international tours and performed at Carnegie Hall in Spring 2016 coinciding with the orchestra’s 75th anniversary celebrations. The Utah Symphony has released more than 100 recordings, including Mahler Symphony No. 1 in Fall 2017, and will release the first of three CDs of all Saint-Saëns works in January 2019. Utah Symphony | Utah Opera, the orchestra’s parent organization, reaches 450,000 residents in Utah and the Intermountain region, with educational outreach programs serving around 137,000 students annually. In addition to performances in its home in Salt Lake City, Abravanel Hall, and concerts throughout the state of Utah, the Utah Symphony participates in Utah Opera’s four annual productions at the Janet Quinney Lawson Capitol Theatre and presents the six-week Deer Valley® Music Festival each summer in Park City, Utah. With its many subscription, education, and outreach concerts and tours, the Utah Symphony is one of the most engaged orchestras in the nation. For more information, visit utahsymphony.org.